The FBAR form (TDF 90-22.1) (report of foreign bank and financial accounts) must be filed by 6/30/13 on line to avoid potentially horrendous penalties.  The process is fairly simple, but has one glitch. After you 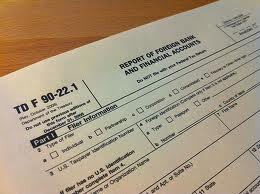 register, and are given access to the form (which looks just like the paper form), to finally submit the form you must enter a PIN number which the screens says was sent to you by email (at your the email address you gave when you registered). That statement often is not true. Many have never received a pin number by email and you cannot file the form without the  8 digit PIN number.

You can get your pin number by going back to the main screen and looking at the left hand column for the link there that mentions PIN in its description.  Click on that link and you can then receive a new PIN number and then go back to the submission screen, enter it, and you are done. Be certain to print out your proof of filing and keep track of your user name and password for next year.  This handy hint may save you 40 minutes or more waiting on the help line for them to explain to you that the website is not correct and then tell you where to find the PIN number.

The link to register to file your FBAR on line is at:  http://bsaefiling.fincen.treas.gov/Enroll_Individual.html

After June, paper form filings will not be allowed. If you try to file on paper, your form must arrive by 6/28/13.  Unlike tax forms, date of postmark does not count!

The IRS has put together a list of the most common questions they receive from US Citizens and Nonresidents living abroad about their US tax returns and rules.  Click on the heads to each section to go to the questions set forth below it.


Need further help or explanations?  We have specialized in US Expatriation, International and Nonresident taxation for over 30 years. Email us at ddnelson@gmail.com or visit our websites at www.TaxMeLess.com or www.ExpatAttorneyCPA.com .  Skype: dondnelson

The world's rich economies said they would take a tougher stance on fighting money laundering and tax evasion but promised little in the way of specific new action at the end of a two-day summit on Tuesday.

The Group of Eight leaders signed up for a string of aims including improved transparency about who owns shell companies and more information-sharing between tax authorities.

Under pressure from austerity-weary voters, lawmakers have focused increasingly on tax dodges. More than 50 countries have agreed to a new protocol on tax data sharing since 2011.
Cameron said his proposal that firms report profits on a country-by-country basis could help expose corporate profit shifting into low-tax states.

The G8 leaders, meeting in Northern Ireland, said their governments would draw up action plans for collecting and sharing information on who really owns companies, making it harder to set up Russian-doll type structures.

The United States pledged to keep on pressing for legislation to cut down on the criminal use of shell companies.
"The credibility of this depends on the ability of the White House to advance legislation," said Gavin Hayman, director of campaigns at anti-corruption group Global Witness.

The United States pointed out it was planning to require banks to understand who their customers actually are and provide information for law enforcement and tax authorities.

A frequent critic of tax havens, the United States has come under fire from campaigners for the low transparency requirements around ownership of corporate entities registered in some U.S. states such as Delaware.

Tax campaigners had called for companies to be forced to make public their profits, revenues and tax payments for every country where they operate. That could deter accountants from building contrived arrangements to keep tax low. Business groups remained against such a move.

"We continue to have real doubts about the utility of any rules requiring the release of vast amounts of raw data to the public," Andrew Wilson, UK Director of the International Chamber of Commerce said in a statement.
The G8 leaders also called on the Organisation for Economic Co-operation and Development (OECD), which advises rich nations on economic policies, to come up with a way that could require multinational corporations to report profits and tax payments to authorities on a country-by-country basis

Some developing nations complain they struggle to get information about companies' operations in other countries, so the measure could help them cut profit shifting.

The OECD is working on a broader program  to tackle tax avoidance under the auspices of the Group of 20 comprising the leading developed and developing economies.

What is described above at the G8 is the wave of the future. All countries will within the next few years be sharing tax data, etc. with each other. Now is the time to get into legal compliance with your tax filings before it is too late.  If you need help email us at ddnelson@gmail.com .

FATCA and IRS Foreign Asset Reporting Seminar in Cabo San Lucas on 6/21/13 presented by Intercam and Don D. Nelson, Attorney and CPA - READ MORE
Posted by Don D. Nelson at 9:27 AM No comments:

After 10 years of controversy and refusals to make a ruling, the IRS has finally ruled that most Fideicomiso's in Mexico are not foreign trusts and are not required to file Forms 3520 and 3520A.

Revenue Ruling 2013-14 describes a typical fideicomiso or Mexican Land Trust (MLT) and concludes that the arrangement is not a trust within the meaning of § 301.7704-4(a)   You should read this ruling carefully since it only applies to the situations described therein. If you have Fideicomiso that falls outside the the ones described in this ruling, you may still be a foreign trust under US tax law and be required to file special forms.

Email ThisBlogThis!Share to TwitterShare to FacebookShare to Pinterest
Labels: 3520, 3520a, Fideicomiso, foreign trusts

You can file your FBAR form for 2012 on line in order to meet the 6/28/13 filing deadline. Got to  http://bsaefiling.fincen.treas.gov/Enroll_Individual.html to file it.  Print out a copy while there so you have proof it was filed.

The penalty for not filing  this Report of Foreign Bank and Financial Accounts can be $10,000 or more as well as the possibility of criminal prosecution in the event the IRS can show you intentionally did not file the form.  It is not a tax form, but a reporting form with tremendous penalties for not filing.
Posted by Don D. Nelson at 9:06 AM No comments:


In general, FBARs must be received by the U.S. Treasury Department by
June 30. Because June 30, 2013, falls on a Sunday, FBAR filers should
plan to have their 2012 FBARs received by Treasury by Friday, June 28,
2013. Unlike income tax filings, the FBAR due date is not extended to the
next business day when the deadline falls on a weekend. In addition,
unlike income tax filings, there is no “mailbox rule” with respect to
FBARs, so the deadline is measured by the date received, not the date
sent.

The FBAR should be delivered to the address shown in the
instructions to the FBAR (Rev. January 2012). A street address is provided
in the FBAR instructions if an express delivery service is used. Although
paper filings still are acceptable for timely filed 2012 FBARs, filings made
after June 30, 2013, are required to be done electronically (using the BSA
E-Filing System).
Posted by Don D. Nelson at 12:54 PM No comments: